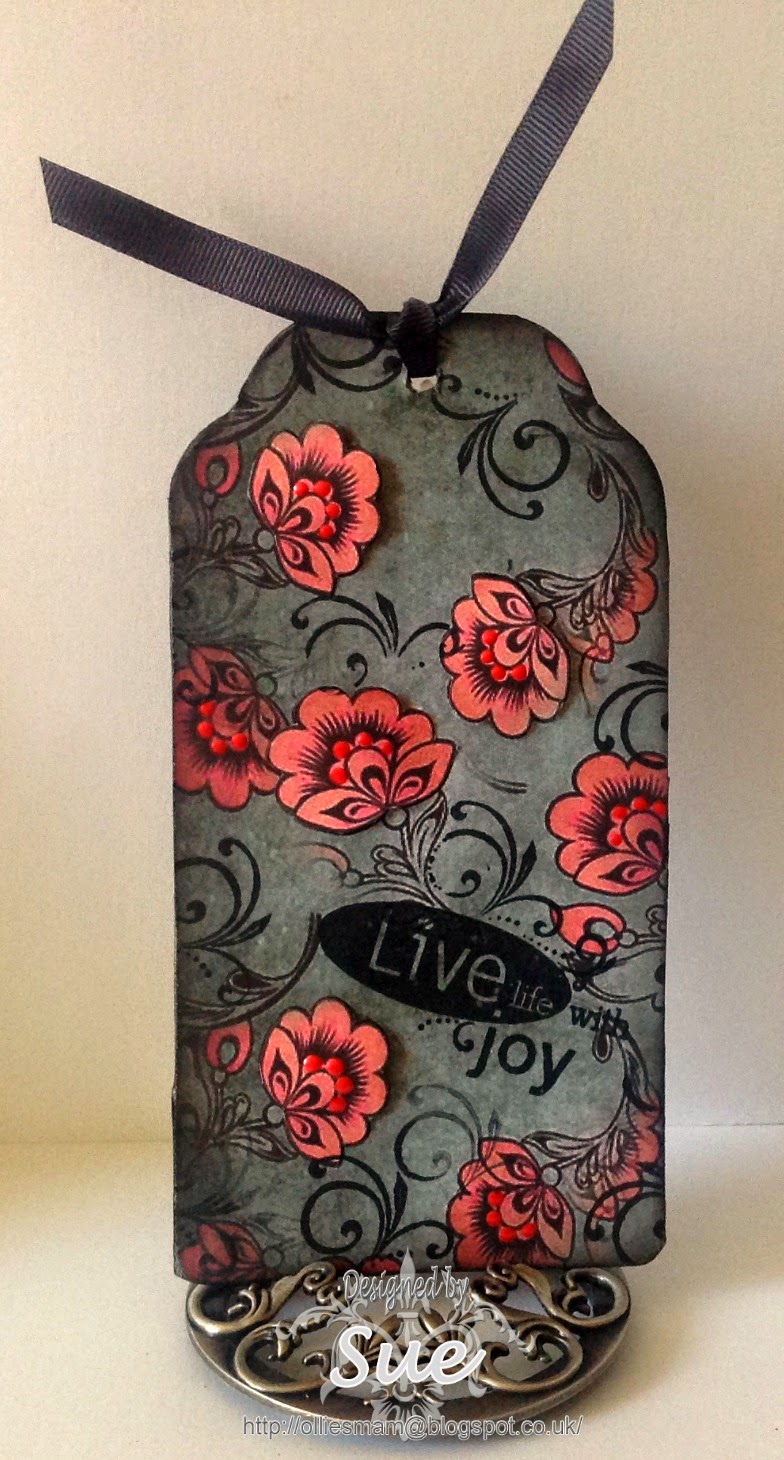 Hi everyone..it's my turn to do an inspiration piece for our blog and I thought I would use this absolutely stunning paper! I love it..it's really gorgeous and even better IRL!!! I bought some grungeboard tags at a craft fair and they have been stashed away in the land of not used stash for over a year lol so I thought it was about time I used them. I covered it with the paper and then cut some extra flower heads out and decoupaged them and added some liquid pearls and a lovely sentiment..then edged it all with Black Soot DI. They are quite large tags and not suitable for adding to a present but they can be given as a keepsake for someone. Thanks for popping by and I hope I have inspired you to delve into the dark corners of your craft room and find some forgotten stash....have a great week!!!! and TFL huggless Sue xxxx
Posted by Sue at 9:00:00 am 1 comments 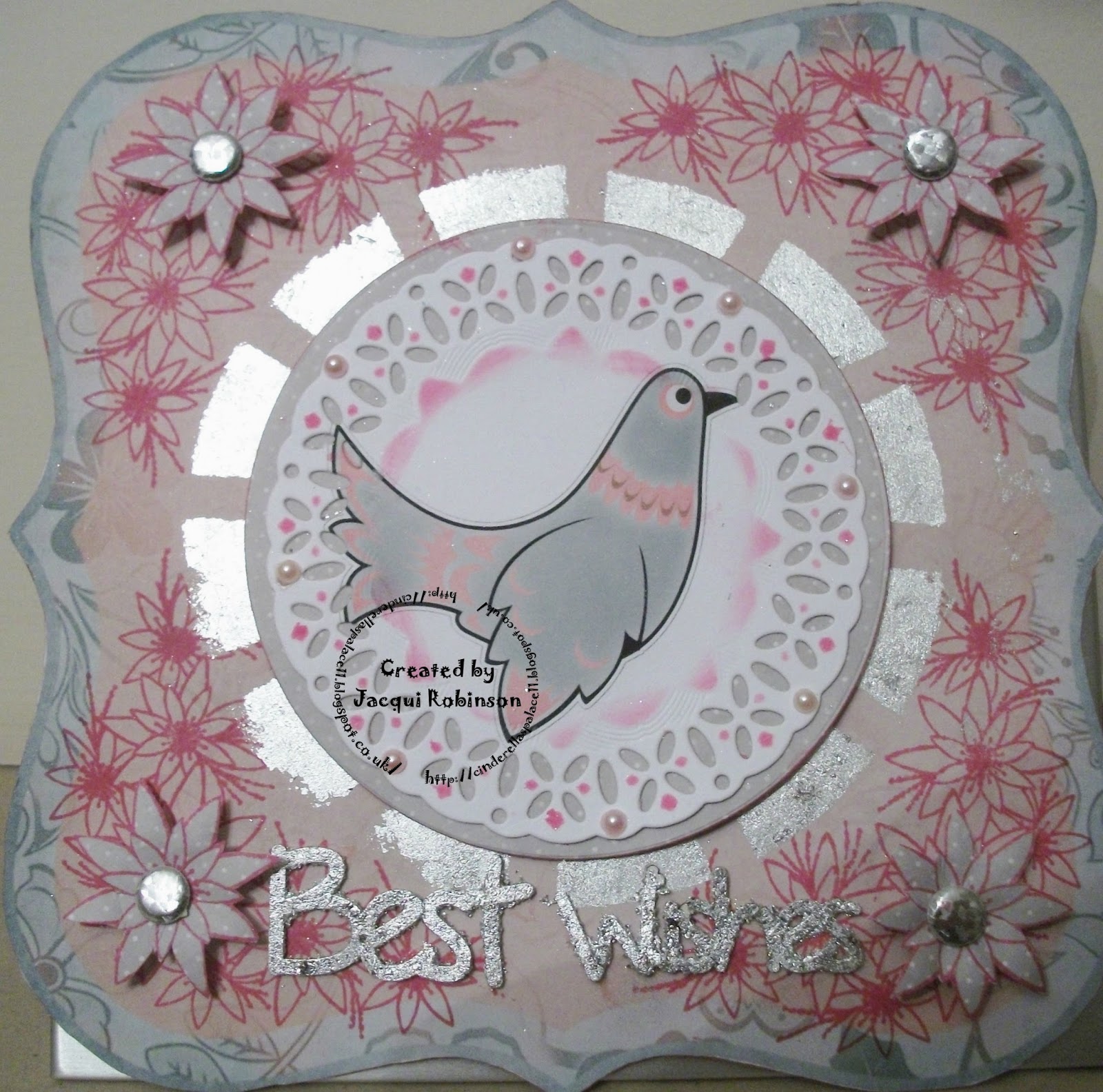 Hi guys gals and fb pals its Jacqui here with my monthly inspiration for you.  For this month I used the gorgeous "Home Tweet Home" kit as its sooo awesome. Full of pretty pinks, blues and grey's perfect for the current trends with its soft papers and birds.  For this card I went to town lol, but it still came together really quickly.  I printed out two of the mats in the "Home Tweet Home" kit and just one of the toppers.  I scored the second mat about an inch from the top folded it and stuck together to make the base.  Then I cut one of the toppers out with a SB die  and used some pink lipstick ink through the die and put it on a grey mat.  I took one of my stamps and some of the distress ink and stamped each corner to accent it.  I also decoupaged the centre flower and used some silver card candi.  I wanted to highlight the topper as much as possible so I lay one of my masks over my mat and put some flitter glu through then used some silver gilding flakes.  This is a great way to highlight something.  I also put the silver flake on my words too.  To finish I added a few gems around the topper as we all love bling.  So what do you think let me know.  Got any questions ask me you'll find all the details below.  Hope to see you on the fb page for fun and loyalty points.

See us on CraftsUPrint
http://www.craftsuprint.com/janette-padley/

Inspiration by Gwyneth - May

Good Morning Everybody!
Today's make is a card with an illuminated scene that has a battery opperated tea-light inside.  So as not to distract from the illuminated image I've kept the base of the card quite plain. I hope you like it. 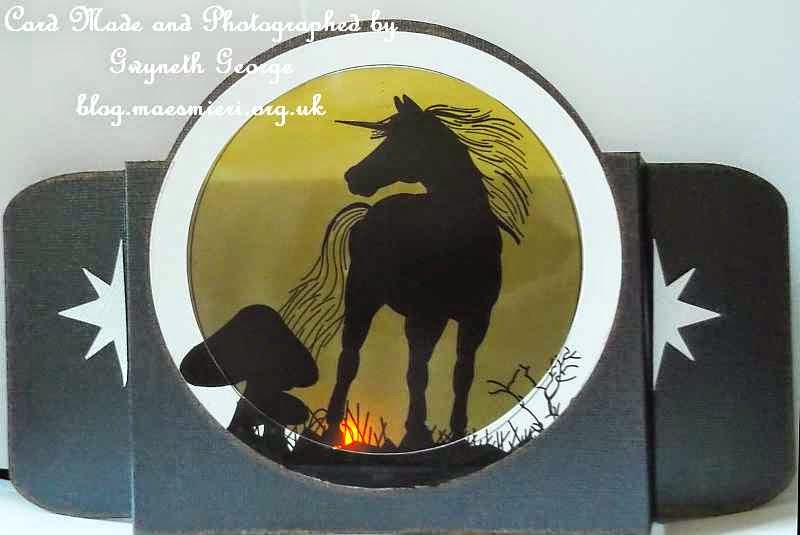 Closer look at part of creation - the gold edging is very faint - just catching the light with a twinkle rather than being "in your face" distracting from the main image. 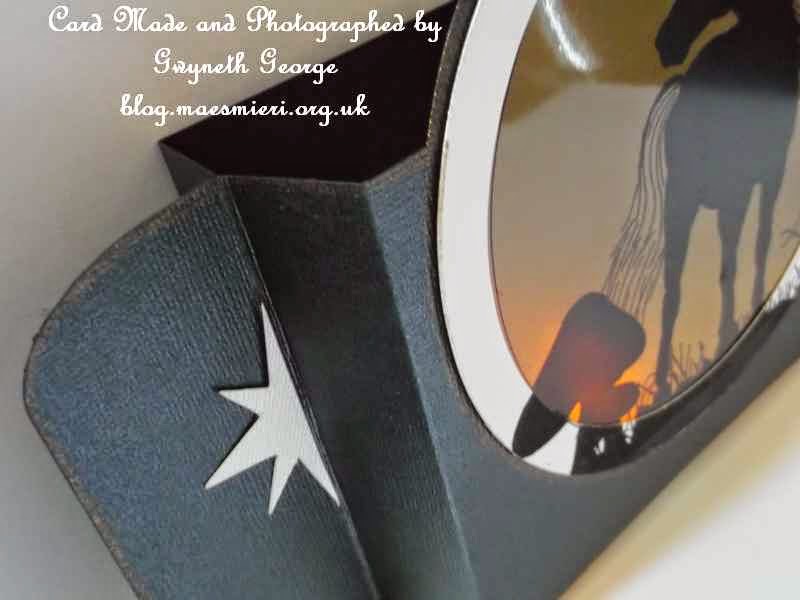 The image was printed twice at the same size, once onto white cardstock and once onto gold printable acetate. I then cut the card printed one along the line on the image and also around 1cm outside that - to use as a frame.  I glued this over the acetate one becure cutting the acetate the same size as the frame.  I cut out the base card using my ScanNCut, making an aperture in the front piece the same size as the frame centre of my topper.  I also cut out a star out of white cardstock.  I used my Hougie board to score in from both ends of front and back twice and folded and burnished.  The outside "flaps" of both sides were attached front to back using tape.  I cut the star in half and glued the halves on either side of card "wings".  I finished by going around the outside of the card and the circle using the "Shake" marker.


-oOo-
And that is it from me for today.
Please keep coming back regularly to look at new posts as over the next few weeks you'll find various "Inspiration by ..." posts appear on this "Dragons Den" blog, as well as colouring tutorials and other posts by different Design Team members.  I'll be back with more posts over the coming months as well, so keep an eye out for those.

Till next time - Have Fun Crafting!
Gwyneth
DT Member
(And if you are wondering "who's Gwyneth?" - then you'll find an "About Me and My Blog!" piece on my blog.)
Posted by Gwyneth at 8:00:00 am 1 comments 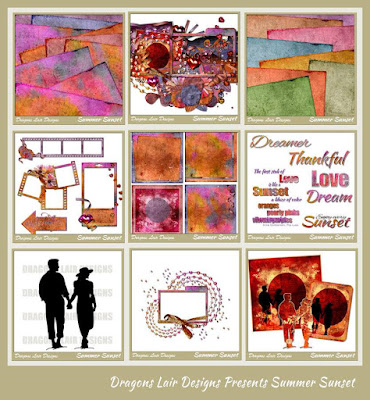 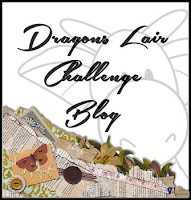